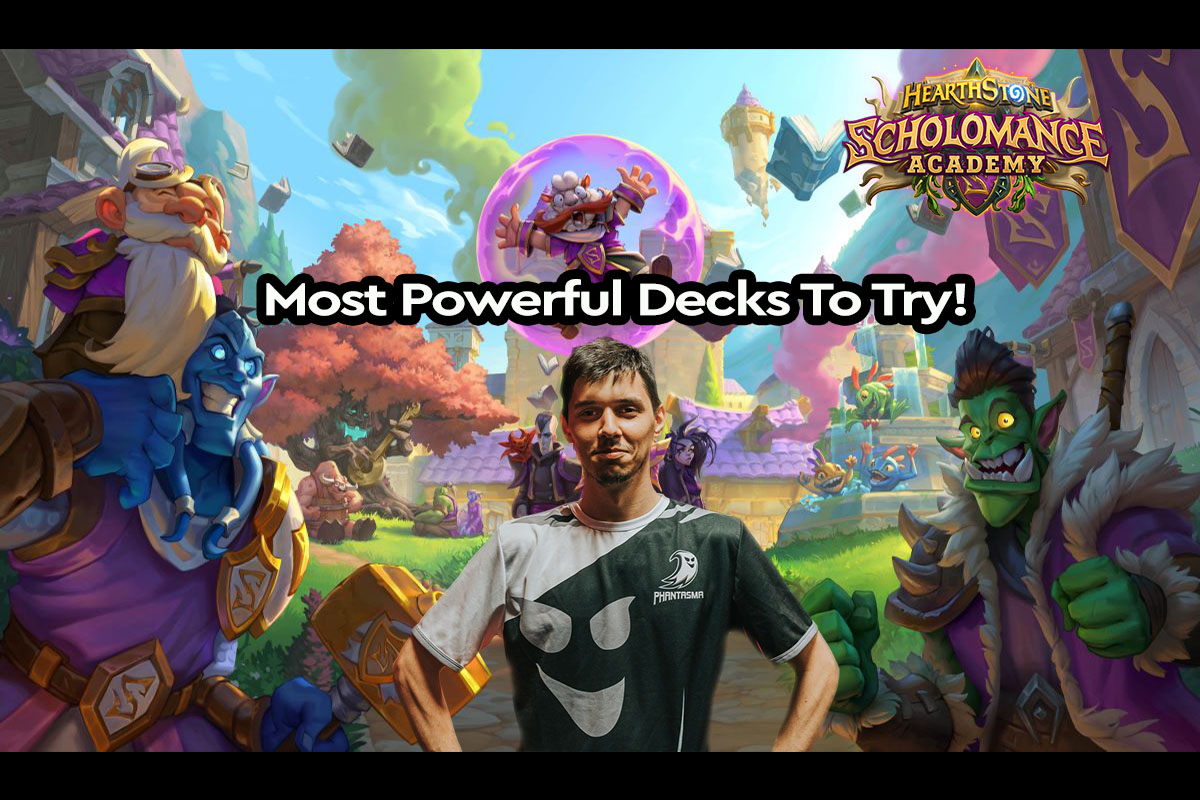 I am Athanas, a competitive Hearthstone player representing Team Phantasma. Today, we will speak about the best decks in the game right now.

Not even a month has passed from the release day of Scholomance Academy and almost every archetype of each class has been tested. The META will soon stabilize, but I believe that there is still time and opportunities for experimentation.

These days, the most popular decks with the best winning percentage for all the Hearthstone Ranks are the ones shown in the following picture:

Each rank has its own ecosystem of decks that are played and the game changes a bit as you reach high Legend matches.

Personally, I have managed to play more than 600 high Legend games and I will mention the decks that I believe that define the top1000 Legend right now.

Bomb Warrior is the most effective deck right now in my opinion. The winrate playing with it is around 52,28% at top1000 legend ranks, with more than 22.500 games as sample size.

The addition of the new cards (Cutting Class, Doctor Krastinov) create great synergy in the deck and the removal cards: Coerce & Lord Barov, create a big impact. Purpose of the deck is to stall the match by using removal spells and to fill the opponents deck with bombs.

The most crucial cards we are looking to get in the beginning of each game areQ Corsair Cache and Ancharr. They help us in card drawing in general and to gain Wrenchcalibur, a very important weapon for the deck.

We can see some statistics for these cards that justify their importance:

In over 3.000 games, Corsair Cache has been kept in over 97.2% of the time in the mulligan phase and Ancharr around 84,6%. Whenever we have one of these cards in our starting hand in the first round the winrate of the deck reaches 59,3% (Corsair Cache) and 63% (Ancharrr), respectively.

Even if it goes against my personal play-style philosophy and class preferences, I have to mention – the not-so-fun to play with or against – Priest!

I don’t have a lot of experience with this deck and I am trying as hard as I can to avoid playing it, but I can understand the reasons why a lot of players choose to play it, specially in high legend ranks with a lot of success. The deck is strong!

It is an all around deck, that exploits the mechanics of removal and generate cards. It can find all the correct answers against the most control or aggro decks out there.

Based on HsReplay stats, Highlander priest has a 52,07% total winrate at top1000 legend rank and his best matchups are against Galakrond Priest (61,2%, but be prepared for 30-40 minute games) and against Enrage Warrior (66,1%).

It is time for one of the most popular decks this expansion has offered till now, Beast Druid!

The new cards that the class obtained with the Scholomance Academy expansion (Guardian Animals, Survival of the Fittest, Twilight Runner & Lighting Bloom) have an insane power level. The deck has more than 55.000 games played in the top1000 Rank and we can assume that the winrate (51,40%) is the accurate to judge the efficiency.

The best cards to aim for in the mulligan phase are Wild Growth and Overgrowth. Whenever these cards are played on curve the winrate of the deck gets boosted to 60% and 63,5%, respectively. On top of that, this deck is a good choice when you want to win against Galakrond Priest builds (56%).

This new archetype of Rogue is a good choice against the most popular decks of the current META. It has 55,3% winrate against Guardian Druid and 57,4% against Bomb Warrior.

The arsenal of Stealth Rogue is consisted of a plethora of low-cost-stealth minions and burn spells and aims for face damage.

Greyheart Sage is the best card to play on curve, in my opinion, in this deck. Great Tempo card that draws two cards as a bonus. Also, Secret Passage is a very helpful card mid-game, that helps us to play a power turn mid-game, allowing us to keep our hand for a future turn. Also, we can put pressure to our opponent’s health pool by putting 2-3 minions on the board, depending the situation.

The cards we are looking for in the beginning of a match are ALL the low-cost minions ones and Greyhart Sage. For example: We get at Mulligan phase 2x Sinister Strike + Greheart Sage. In this situation by keeping only Greyheart Sage we increase our chances to get a card to combine with it till turn3 that her ability gets enabled (6draw chance).

Secret Passage is not a keep at Mulligan phase in general (28,5 winning chance with it), but if we have a curve combination we can keep it to use it at turn5-turn6.

My last pick for today will be Tempo Mage, the most exciting deck in my opinion to play this period. The Winrate percentage is not something special (51,16% / 22.500 games sample size / top1000 Rank), but I guarantee that you will have fun with it!

The win condition of this deck is easy to identify. You need a continuous burst of spells at mid-game!

This deck is experience demanding, cause you need to take a lot of correct decisions all the time that they change depending your opponent and the momentum.

Against the popular decks this period, it has a very positive winrate only against Rogue (63,7%) and struggles against Bomb Warrior (34,26%). It is an equal matchup against Galakrond Priest (50%) and against Guardian Druid (45%) your decisions matter even more for the outcome of the game.

Kael’thas and Illucia got nerfed these days, but I don’t believe that it will affect the dynamic of the current META. They still preserve their power level.


All the images and statistics that were used in this specific article were courtesy of HsReplay.net, a data analysis platform for the game of Hearthstone.