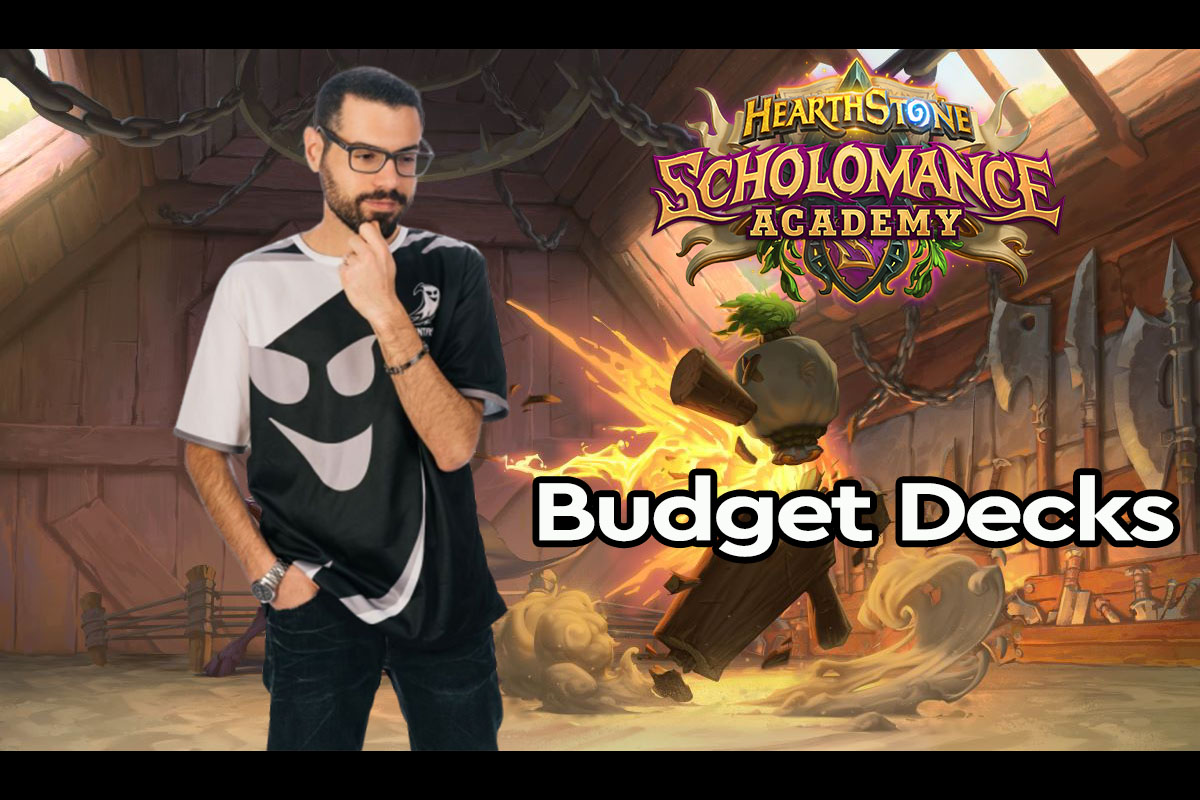 The latest Hearthstone expansion, Scholomance academy, has been out for a few days and whether you love or hate the new cards, it is undeniable that they have shaken the meta to its core.

There have been a lot of innovating ideas already, but powerful decks keep on spawning left and right, while there are already rumors regarding upcoming nerfs. In this chaotic and rapidly changing environment it can be very hard to decide what cards you would like to craft or even find a strong and affordable deck to play until the meta settles down.

For these reasons, I am writing this article to suggest some solid budget options that should make the first days of this expansion enjoyable, while not making a dent to your wallet (or dust stock).

Aggro Rogue was one of the first aggressive decks to appear and it dominated the high legend ladder during the first day of the expansion. It is an extremely fast paced deck that heavily favors face damage over board control.

Playing a lot of cheap and low value cards is more than balanced out by the amazing draw engine the archetype uses. Cutting Class and Voracious Reader are very strong and inexpensive refills, but the Secret Passage is straight up cheating, giving you access to 5 extra cards for only 1 mana!

Piloting the deck, you should Mulligan aggressively for your early minions and try to get some board presence in the beginning. You can afford to remove enemy minions if that will ensure that yours keep on pushing damage, but once you start losing control of the board it is important not to waste resources and focus on dealing face damage.

The most crucial card to master in Aggro Rogue is no other than the Secret Passage.

Don’t forget that the more mana you have the more value you will get out of it, since it will be easier to use most ,if not all, of the drawn cards. On the other hand, don’t be afraid to use it even early on if you are looking at a very weak turn or you are in need of specific cards. The draw engine of Aggro Rogue is so strong that with very low cost hands you should even keep a Voracious Reader or Secret Passage in the Mulligan, especially against slower decks.

Beast Druid is undeniably the superstar of these past few days. Arguably the most played deck in tournaments and high Legend Ladder, it has already amassed a lot of hate for its oppressive playstyle and many players are calling out for nerfs.

The list presented here is a budget version, if you own cards like Speaker Gidra and Ysera, Unleashed it is advisable that you include them.

The game plan for Beast Druid is pretty straight forward, ramp and play Guardian Animals as soon as possible. From there, with the board presence it will give you, as long as draw and deck thinning it should be easy to piece together secondary combos of the deck with Kael’Thas or Mountsellers. Animated Broomstick, though it might seem a peculiar inclusion at first, is not to be underestimated! It can be utilized in a Mountseller turn to clear board or it can just be combined with Lake Thresher to take care of multiple minions earlier on.

The Mulligan for the deck is quite simple, we are looking for our ramp cards, Wild Growth and Overgrowth in every matchup. Nature Studies is also a solid keep, since it can give access to ramp through the discover mechanic and it can be used to set up an earlier Wild Growth or Overgrowth. Against slow matchups Guardian Animals is also a keep, while you should always consider keeping a Lighting Bloom if it synergizes well with the rest of the hand.

This is a quite interesting take on a slower Tempo Demon Hunter, which I whole-heartedly encourage any fan of the class to craft and try, especially since it is extraordinarily cheap.

Instead of the typical lists that are heavy on 1drops and 2drops, this list is running the Soul Fragment package, along with a lot of cheap aoe removals and a ton of draw/cycle cards.

Playing this type of Demon Hunter, you want to utilize your early minions and removals to maintain control of your opponent’s board, while building soul fragments and cycling cards.

Starting from turn 4 you want to switch on the aggression and start dealing heavy damage on your opponent’s face, with cards like Marrowslicer, Glaivebound Adept and Soulshard Lapidary.. This deck shines against aggressive decks, because the cheap aoe can stop any early push they might try, while Soul Fragments along with the Aldrachi Warblades lifesteal effect will maintain our health to safe levels.

Regarding Mulligan, you are mainly looking for Spirit Jailer, Manafeeder Panthara and Crimson Sigil Runner, if it can be outcasted. Depending on the matchup you will have to decide whether you need to keep or even look for early removal and/or lifegain.

Totem Shaman in a very similar form existed before the expansion came out. Though it certainly has its weaknesses, especially against aggressive decks, it is one of the few archetypes that can claim to have a favored matchup against Beast Druids, which is not a small feat by any means.

This modern technology Totem Shaman, is taking advantage of Lighting Bloom to create powerful boards earlier than before, while Tour Guide allows for the combination of hero power plus Totemic Reflection as early as turn 3.

Trick Totem, has also proven to be quite formidable, since the random spells it casts have proven to be surprisingly useful. The last of the new cards included, Diligent Notetaker, is very powerful with the 0 mana spells, and can provide huge buffs on a totem board.

The game plain is obviously pretty simple, stick totems to the board, buff them up, and smack your opponent until his portrait explodes. Despite that, it can be quite tricky to set up a totem board and the importance of accurately playing the first few turns cannot be underestimated. Key point to success is Tour Guides battlecry, so you should avoid wasting it unless you are setting up for a strong play.

It is also crucial to correctly judge the right time to pull the trigger on your aoe totem buffs. If you use them too soon you risk lacking the board necessary to finish the game, whereas waiting for too long can give your opponent the chance to clear the board.

In the Mulligan, aside keeping your 1drops and 2drops, it is important to watch out for cards that work well together, like the afore mentioned Tour Guide plus Totemic Reflection synergy.

I have always been a huge Face Hunter enthusiast and I must admit I was very pleased when I saw some of the cards that were being released and theorycrafted them into the archetype.

Although it remains to be seen how well Face Hunter fits the meta, it has gotten a couple of very strong tools that significantly improve its power level. The interaction of Tour Guide with Dwarven Sharpshooter and Phase Stalker is just amazing and helps Face Hunter establish a strong board presence, while Wolpertinger and Adorable Infestation further solidify its early game.

Face Hunter has an unjustified rumor of being a very simple deck to play, however this could not be further away from the truth. In reality, even a small mistake can result in your opponent surviving the onslaught and clutching victory. This is why it is crucial to always keep track of how much damage you can pass on the upcoming turns and carefully balance setting up a clock for your opponent and maximizing your overall damage.

As far as Mulligan is concerned, we are looking for 1drops and 2dropds, except Voracious Reader. In addition to those, the Side Quest is a must keep in every matchup and Adorable Infestation is a keep if we already have 1drops.

Despite the chaotic meta of the first few days and some pretty expensive decks dominating it, there are still solid budget options that will allow you to have fun and explore some of the new mechanics until the dust settles and the safe crafts become clearer.