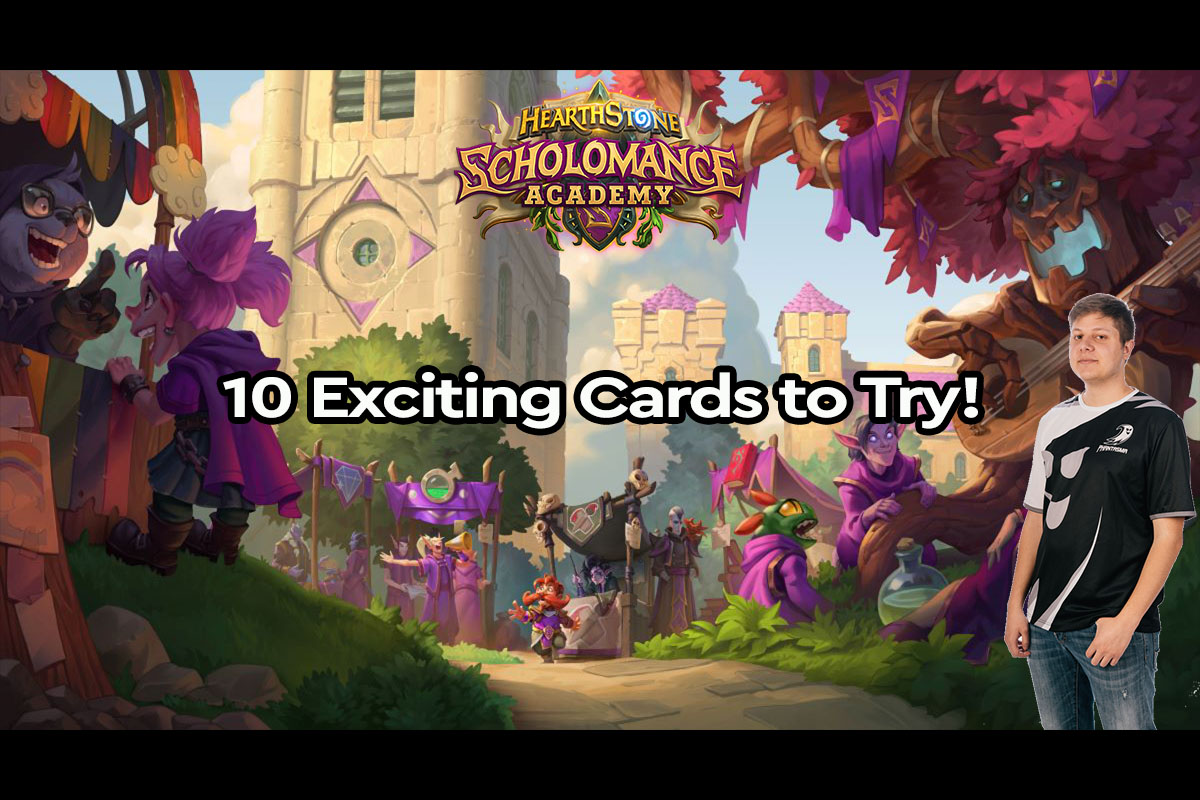 Hello my name is Pain and I have been a competitive hearthstone player for a long time, playing currently for Team Phantasma. As almost everyone here I am really excited every time a new expansion is announced and the new cards are getting revealed.

It is the time period everybody makes all these ideal scenarios in their heads, wait patiently to try all these ideas and see them fail or see if they actually work when the expansion is available – few days left FeelsGoodMan.

Here i am listing my opinion of the cards i am more excited to play during Scholomance Academy, mostly from the perspective of an aggro/combo play-style gamer.

Not drawing high cost unplayable cards that clog your hand is the main aspect of using Sphere of Sapience in your deck allowing you to be more greedy while building your deck. Not an actual true believer of the card cause you actually have to draw it, being an one-of legendary card makes that even harder, and you play with a card less than your opponent similar to like having a quest without the reward which is very important in fast paced tempo games (and that’s most of the hearthstone games!).

The reason i have it on this list is because I’m very excited to try this in various wacky decks and getting weird combos more consistently, which is for a lot of people the concept of fun in this game.

Interpid Iniate is a good, solid neutral one-drop at first glance. If you are able to use its spellburst consistently, is the factor that will decide the outcome if this card is good enough or not. When it is activated it has the same stats as Flame Imp, one of the premium aggressive one-drops.

Also we must not forget that in 50% of your games, you will be able to use your coin to activate the spellburst for some really aggressive openings which you desperately need when you go second.
Anyways, i think it might be a decent replacement for Blazing Battlemage or it might see play along with her in aggressive tempo decks that use cheap spells to control the board early game such as Backstab, Twin Slice or even hunter as the class got some cheap spells for spellburst activation. It will even see play in some aggro druids, aggro paladins and some form of tempo mage probably if these archetypes actually can survive in the new Scholomance meta.

Excited to see a good neutral onedrop with potential like this one being printed, its been a long time since we had this.

Not exactly a single card but a whole package of synergies printed as warlock and demon hunter cards.

Every time you draw a soul fragment you heal for 2 and that’s naturally a card that warlocks want to have access to, especially in quest warlock where you cycle the fragments for quest completion. You have to give up the highlander synergies though and you have an extra risk on tapping into nothing after quest completion, but i think it will be at least worth a try in that archetype.

To be honest though I’m way more excited to play the package in a midrange demon hunter shell.

Controlling the board with weapons and your hero power, will be even less punishing for your health total and you have access to 3 insane midrange cards: Shardshatter Mystic, which is a demon hunter only card with a similar effect as the good old Duskbreaker, Soulshard Lapidary, which is a better Glaivebound Adept a lot of the times and Soulcioligist Malicia, which is a midrange powerhouse that swings the board in your favor.

All in all, pretty cool concept and thankfully they didn’t tax the stats of the cards that you are required to play in order to shuffle the fragments into your deck too much.

Another unique effect we have never seen in Hearthstone before, deck manipulation. We don’t know yet the true potential of the card as it needs a lot of sufficient testing, but it can easily turn out to be an insane addition to a lot of decks.

First decks that come to mind that will use this card is Galakrond rogue (topdecking Galakrond with a Kronx/Togwaggle/Flik followup seems already nutty) and a tempo demon hunter that draws Skull of Guldan on outcast position with Altruis off the top every single time for extreme tempo swings.

Both of these seem good in theory but we need to play these kind of cards to actually evalute them, the only thing we are sure yet is that its gonna be fun experimenting with this one.

As a long time toxic aggro player, i think this card has true potential not only because of the insane refill this card provides, but also the unique disruption effect it has.

I think it will see play in a hyperaggressive tempo demon hunter deck (with Frenzied Felwings, Mana Burns perhaps?), so its easier for anyone to play this card with an empty hand. Anyways, its a very unique card that;s worth experimenting with and we will see how it turns out in the end.

This card is a true midrange bomb and it might be even more good than it already seems.

You can possibly play Disciplinarian Gandling in a cube priest that already got kinda popular at the end of this meta, but the true winner of getting this card is zoo warlock.

You can play Disciplinarian Gandling with cheap battlecries – like lackeys and augmerchants that you already want to play in zoo, because of Imprisoned scap imp which, as we know, is another powerhouse of the deck.

I think it also might be worth to actually play Wisps and Desk Imps (new demon version of wisps) along with Disciplinarian Gandling, to unlock the true highroll potential of the card, as you don’t get extremely punished for running such a low value card in this deck. The reason for that is that you can draw an insane amount of cards with Hand of Guldan shenanigans.

I think this card will be the neutral god tier card of the expansion and it might even reach zilliax level of play. You can build your deck and manage your gameplan around this card depending on what you want to do – its sooo flexible.

You want extra value? You can shuffle 2 extra primes in your deck for those grindy matchups. You need good immediate tempo? You can play Vectus after an early serpent egg for a mini Dr Doom on curve. (Or you can play it after a Bomb Wrangler for an actual Dr Boom !!!).

You can also go for some fancy unkillable boards if you feel like it in some other matchups. Not much to say about this one but overall a solid 10/10 card, at least in my opinion.

Many classes got a type of card like this one, but i think druids one is the strongest one of all the classes.

It’s a very good card for the kind of druids that we have seen in the last meta, especially the ones that make use of the Exotic Mountseller, because of the obvious synergy between them.

Nature Studies also enables playing Overgrowth one turn earlier and that’s huge as it accelerates your deck a lot. Also the spell quality of the average druid spell is pretty decent so you don’t have that much of a downside running this card in your deck.

The thing I’m most excited about this card though, is that i strongly believe that it can almost singlehandedly revive miracle druid as an archetype to an at least playable tier.

With Nature Studies along with Lightning Bloom (new innervate) and Gadgetzan Auctioneer, you can cycle through your deck pretty fast and with a Malygos/Forest Warden Omu combo or with Nomi as a win condition.

I see some real potential, but it depends a lot on how fast the new meta will be and if it will be able to survive the new aggressive decks.

We have seen this effect long time ago – with Jeeves, that still sees play in wild where this kind of aggro decks are good enough. Voracious Reader though is 2 mana cheaper than Jeeves and its effect is not symmetrical which makes the card much better.

As an aggro player myself, I’m really excited to mess around with this new card and i can already see it being played in some hyperaggressive decks in the form of aggro rogue with Secret Passage, aggro token druid with Gibblering, some version of aggro paladin that can dump its hand quickly enough or even on some version of tempo Inner Fire priest.

Having high hopes for this one.

This one is a personal favorite of mine, mostly because of the amazing art but its also a tool that shaman desperately needed, which was card draw/card generation.

I like to treat good semi-controlled card generation cards as better card draw cards in some cases, cause you should know the expected outcomes of the card you get depending on the situation you are in and you can plan accordingly a lot of the times.

Also, the flexibility of the card is another thing i like about this one.

You can slam it on turn3 and it becomes a must-remove minion for your opponent, same thing after a full clear. You can either focus on getting from your discovers removal/heal spells when you need to be reactive and value/board generation spells when you need to be proactive. All in all, a very good value card that shaman will most likely use a lot, throughout this rotation year.

As a summary, we all can say that Scholomance Academy brought a lot of interesting cards to experiment with and i can’t wait to play some Hearthstone in a week when the expansion is gonna be available to all of us.

The dual class cards that we have seen partially before – during the Mean Streets of Gadgetzan times – were not on the same power level and this makes things even more spicy. Also it is very important to see how the spellburst mechanic turns out to be.

P.S.
Just do me a favor and don’t rush to play the new priest legendary Mindrender Illucia which i think it will probably be a stupidly strong card made for control priest, an archetype I’m not exactly the biggest fan of to be honest, but i have to acknowledge its power as a single card.