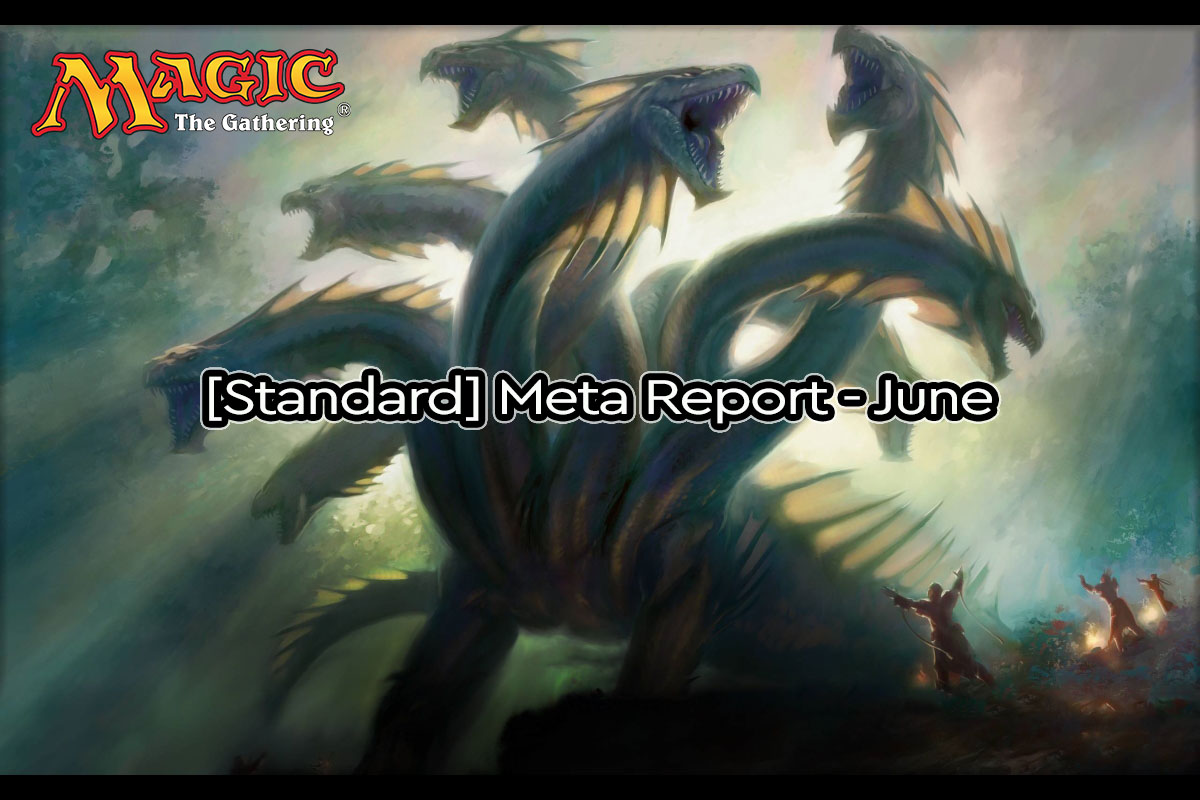 After the recent bans that took place at the beginning of June, it is now time to jump straight ahead to a new Standard Meta.

I hope that you are all excited as I am, because it was a rough 2 and a half months due to the quarantine. Standard (before the ban hammer) was not a place I wanted to delve into, but now I have hope for its resurrection.

For that reason alone, I am going to make a quick review of some of the old archetypes, which I think will rise once again on top after the next set of changes take place. It’s quite a puzzle that needs to be solved, this meta will last until the new Core Set releases in 2021. That will shake things up again and drastically change up the meta once more.

First of all, I have some data from some (online) tournaments that took place in the previous weeks (Std Showcase Challenge, Std Challenge and Against Racism). Below you can see for yourselves which archetypes were represented in the tournaments that managed to make the top 32 cut.

The biggest winners from the latest changes are clearly Temur Reclamation and Jund Food, followed by Mono Red aggro and Ramp (Bant mostly but Sultai was also quite successful).

These are the decks that were chosen by the vast majority of the contestants in these tournaments. Rakdos Sacrifice is just a worse Jund Food and UW Control is probably not as good as Bant Ramp. Same goes for Boros Cycling due to the fact that Mono Red is just so much better as an aggressive strategy.

Let’s delve into some sweet decks from the aforementioned archetypes:

This is the one archetype that was present in the quick Companion era and that has happened mostly due to Shark Typhoon. The deck did have some problems when the opponent had Teferi, Time Raveler, it was the perfect counter.

However it is incredibly difficult for our opponents to play around and through our variety of card choices. Will you jam a planeswalker? We have a shark now. With it’s inclusion in the deck we now have another powerful win condition alongside Uro and Explosion.

The way this deck functions hasn’t changed from previous versions and the difficulty level is not that high. That being said, it does require some practice especially for our mulligan decisions against aggressive strategies which are our toughest opponent.

My beloved archetype is once again playable and in such a great spot! Although the deck took some publicity after the bans, it was not long ago before the changes took place, and a Japanese pro Yuuki Ichikawa took 4th place in the Redbull Untapped tournament, ignoring Companions and reintroduced us to Jund Food.

From that point going forward the deck has indeed changed, however not in its core components. The only notable changes are in some role players and of course in the side-board. As I mentioned in an older article (you can read it here if you want) the deck has some cards that are untouchable when designing the deck. The “newest” addition here is Bolas’s Citadel which combined with Woe Strider  and a high life total will provide a massive board state and sometimes even rewards us even with a win on the same turn!

The grinding logic is of course presen,t and our number one philosophy, but we have to be able to switch gears when needed and take the role of the aggressor, especially when we are up against Temur Reclamation.

Now that is what we call a comeback my friends! The return of the queen Nissa, Who Shakes the World. That is a card that gained the most hype during the ban talks.

This Bant variation functions like a tap out control deck where the Ramp element is vital. There are also two different types of builds; UW Control and Sultai Ramp. Both have their advantages and disadvantages but function in the same style as Bant. When playing an 80 card deck there is a lot of  flexibility according to the card selection, so it is just a matter of preference and  meta analysis.

My personal opinion would be that in the near future we will go towards 60 card control decks again, if the format has 5-6 top tier decks.

“Believe in the Cleave”  is what we were saying a few months ago and it is now time to shout it again!

We are once again in known territory and nothing has changed from the list. Everyone knew this was a top tier strategy some months ago. As an alternative from the above list, there is also one with  Cavalcade which is clearly more aggressive but at the same more of a risk.

If you did not like the previous format and now you want to get into it again, Mono Red is quite a good choice if you want to discover the new Meta and win also in the process.

This deck has proven its worth in the Companion era and is present also in the new meta, but due to the fact that it is just a worse aggressive strategy compared to Mono Red. it has not yet convinced me of its effectiveness. However we have to acknowledge the fact that it is probably the cheapest deck and quite good for new players if they are also looking for something competitive.

Playing the deck is easy, just be cautious with your mulligan choices, because it is unacceptable to keep a hand without any creatures.

In June there are some big tournaments, (technically it is just one, but spread across 2 different weekends so every contestant gets to pick the one that suits them.) hosted on the MTG Arena platform, where we will gain more than enough data to attempt to fully form and understand this new meta.

I am looking forward to it due the quarantine and the ban talks. I have been missing my love for the Standard Format, and I understand many of you feel similar to me, but with these changes my lost enthusiasm is slowly but steadily coming back! I also hope that in addition to my research, there will be some extra surprises out there so that the puzzle of this new meta will not be solved that easily.

I want to wish the best of luck to my teammate Panasavv and of course to all of you competing at the Player’s Tour.

You can see more of Petros “Titan” Tziotis: Twitter