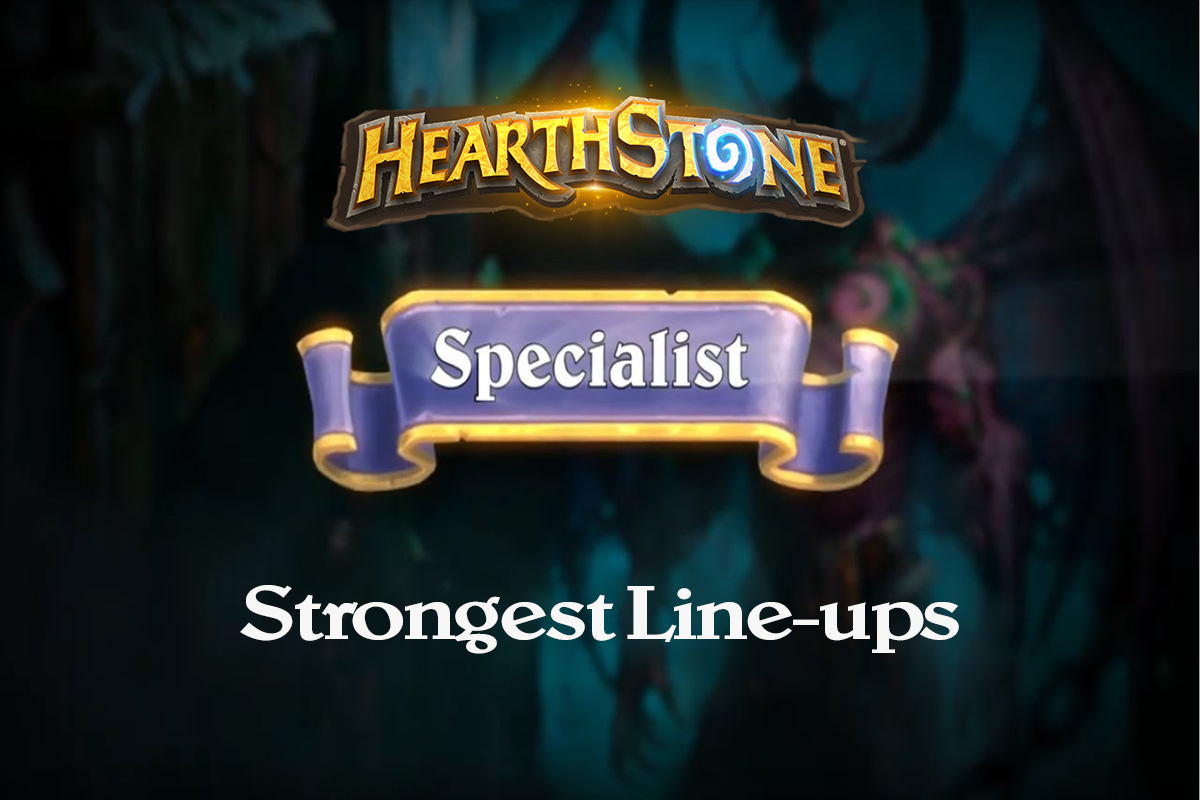 With the next season of Master Qualifiers coming up in a few days, I think it is important for every player that is going to participate in them, to go over the current Specialist format meta, so that he can decide which Specialist Line up is going to work the best for them. So, in this article we will be going through popular and strong Specialist Lineups for various classes.

Rogue and Warrior have been dominating the ladder scene since the new expansion, so it makes perfect sense that they would be a force to be reckoned with in the Specialist format as well. The Rogue class has 3 main Specialist archetypes, Myra’s Rogue, Vendetta Rogue and Miracle Rogue. While Myra’s Rogue is the most popular and probably the strongest of the three as well, you should keep in mind that every other line up has a deck specifically designed to deal with it, possibly even using it as the Main one.

Right off the bat we can see two very different approaches in these lineups.

The First one is the a more solid approach, running Thugs and Greenskin, however it suffers more from weapon removal and can sometimes struggle to activate combos. The Second Myra’s lineup limits the weapon related cards to the absolute necessary, while also running Wisps to deal with one of the worst things that can happen when playing Rogue, not being on the coin!! In both lineups, the Main decklist is the overall strongest and the best to use against other Rogues.

The Second decklist is built to counter Warriors, while the Tertiary list is teched heavily against all kind of aggro or token based decks. If you are not facing a lot of aggressive lineups you can instead build your Tertiary deck to counter Hand Mages, running double Saps and perhaps even Walk the Plank.

Although it is going to be a common thing that the Main list is made to beat Rogues, here the Main deck is the overall strongest and includes Heistbaron Togwaggle, so you can have an edge over Control Warriors.

There is a very good reason for this, against Rogue you don’t want to use Blink Foxes, however you do want to use them against any other Class, so it makes sense that the deck that will be countering Rogues can’t be the Main one.

Therefore, we run double weapon removal and extra sustain in the form of Lifedrinkers in our Secondary deck to combat Rogues.In the Tertiary decklist we once again have a very anti-aggro approach including double Fan of Knives and Mind Control Tech. Again, if you feel like the small percentage of aggressive lineups does not warrant an answer then you can either tech your Tertiary deck to beat Hand Mages, or even make it even greedier than the Main list if Control Warriors give you trouble.

Another lineup in which our Primary deck is not going to be targeting Rogues. The Main deck is the most solid of the three lists and incredibly strong against decks like Control Warrior, Bomb Warrior and Hand Mage.

The Secondary deck is obviously made to counter Rogues, running three sources of weapon removal, a necessary tech, since it is a very hard matchup for this lineup.Our Tertiary list is again teched heavily against aggro, even including Thalnos to buff up our aoe spells. This lineup might not be the best Rogue has to offer in terms of raw power, but not relying on Waggle Pick and its synergies is very important in a meta full of weapon removals.

Warrior has two main power houses in the Specialist format, Control and Bomb Warrior. Even though Control Warrior is generally considered the overall superior deck for ladder, it struggles a lot against decks heavily teched to beat it. Since pretty much every lineup includes a deck to answer Rogues and another one for Control Warriors the lineup performs a lot worse at the moment than it should, because of its own popularity.

On the other hand, Bomb Warriors have been seeing more and more success.

Our Primary list here has the advantage of addressing the Rogue problem, while at the same time also being very effective against aggressive decks overall. This frees up our Tertiary deck slot which we use to counter a tough matchup, Hand Mage, with the use of Big Game Hunters. The Secondary list runs every bomb generator and Elysiana and is very strong against Control Warriors or any other other control deck.

Firstly, let’s address the Secondary deck and the Mecha’thun tech. I think this is one of the best ways to run a Control Warrior lineup, using the Mecha’thun-Boomship Combo to get a huge edge in the mirror.

The only way you can lose a mirror with this deck is from Unseen Saboteur or Hecklebot. Since Saboteurs are not seeing a lot of play, you just need to mulligan hard for Malygos-Mecha’thun and draw aggressively until you have them in your hand and then the game is over, even against Hecklebots.Regarding the Main deck, because we need a six card combo for the Mecha’thun combo we are forced to play a sub optimal card, whirlwind. Despite that, the deck is very strong against aggressive decks and of course Rogues.

On our Tertiary list we run double owl to counter Hunters and also to improve our matchup against Hand Mages.

The Mage class has been on the rise, seeing more play in ladder and of course in Specialist format tournaments as well. The Main Mage archetype is Hand, or whatever people call it this week, Mage.

It is a decklist that can muscle through anything, especially with a good starting hand and can’t easily be targeted by Secondary decklists. It also has a lot of free slots to run tech cards, like weapon removal or Mind Control Tech, and can easily use the five card sidedeck to switch from antiaggro to full greed decklists.

The Primary deck continues the trend, as it is the strongest overall, as well as the best to use against Rogues.

The Secondary deck is very greedy and even runs Meteorologist to help close off games. It is quite strong against Control Warriors, mirror lineups and generally slower, control decks.Finally, on our Tertiary deck we use every aoe we can get on hands on, doubling up on Mind Control Tech and Mossy Horror and even adding a Baron Geddon on top.

It goes without saying that this deck should be your choice when facing aggressive decks like Token Druid or Zoo.

Even though Hunter has a number of different archetypes that someone might encounter, like Midrange Hunter and Oblivitron Hunter, they are hardly ever used in Specialist format and without great success. That means we will only be over Bomb Hunter.

This archetype is very strong, especially against slower decks that cannot easily disrupt its early curve, however it can be quite weak against Rogue decklists that run double Sap or even silence techs. Players have started picking up on Bomb Hunter being more popular and will not hesitate to address the deck with techs in their Tertiary deck, something that hurts the Bomb Hunter line up a lot.

The way this lineup is built is reminiscent of the way most players would build their Midrange Hunter lineups before the rotation. We have a Primary deck that is just the strongest possible variation of the deck, with only a little nod to Rogue in the form of a single ooze, and then the Secondary and Tertiary decklists try to address the most popular lineups as well as aggressive and control decks.

Therefore, against Rogue we can switch to our Secondary list that runs double ooze, double safeguard and has a lower curve to fight more effectively for board in the early turns.Finally, against Control Warrior and other control lineups our Tertiary deck should be quite effective, capitalizing on the sticky minions and adding the powerful Mechanical Whelps in the mix.

Leaving aside meme decks like Murloc Shaman, the only real representative the class has is Big Shaman. However, despite what the name indicates, it is still not on par with the big boys, at least in the Specialist Format.

This could easily change in the near future if the meta changes, for example if Bomb Hunter becomes more dominant that would give a big boost to Big Shaman, since it has access to tons of cheap and effective silence and removal tools.

The decklists also leave a bit to be desired, so perhaps finer tuned versions of this line up could bring more success and popularity to the class.

This is a pretty straightforward lineup, the Primary deck is what you would use in ladder, it has no polarized matchups but does not heavily target a specific deck.Due to the fact that Big Shamans don’t have access to weapon removal, because of Eureka! And Muckmorpher’s effect, in the Secondary list we use instead more aoe, removals and defensive cards.

This list is probably the single best deck in the entire field against Bomb Hunter.On the other hand, the Tertiary deck is focusing on big minions and running the opponent out of resources.

It is very strong against Control Warrior and control decks. The biggest problem of the entire lineup is Rogue and the absence of weapon removal.

Rogue and Warrior definitely reign supreme, however they can both have hard times against decklists specifically focusing on countering them. Mage and Hunter are harder to tech against without compromising your deck, but fall a bit shorter in terms of raw strength compared to the previous mentioned classes. Shaman could potentially see successful play but is at best a questionable choice at the moment.