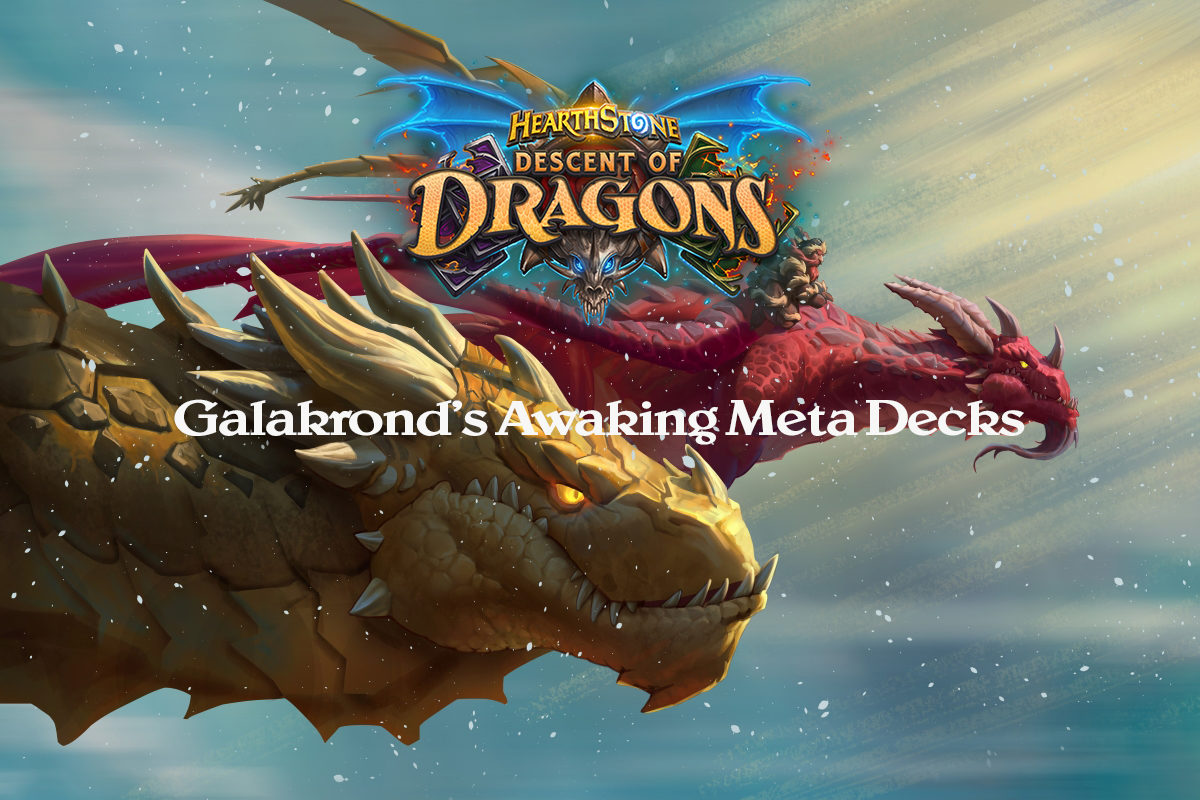 It has been awhile since the latest adventure of Hearthstone, Galakrond’s Awakening, and the new cards coming alongside it were released. The meta has begun to slowly stabilize, therefore I am writing this article to go through the best and most popular decks for each class, at the moment.

Rogue was undoubtedly one of the strongest classes before the Adventure was released.

The Galakrond and Highlander archetypes were incredibly powerful and dominated not only ladder, but tournaments as well. It is a bit unfortunate that the class’s playstyle was almost unaffected by the new cards. The most popular Rogue lists at the moment run the core of the old Galakrond deck, barely using any new cards.

A very interesting take and personally my favorite Rogue deck at the moment is the Quest Galakrond Rogue archetype that does not wish to complete the quest it runs. The concept is simple but genius. We basically use Bazaar Burglary only to activate Licensed Adventurer, Questing Explorer and Sky Gen’ral Kragg.

Warrior was also one of the most prevalent classes before the newest adventure, a close second to Rogue, and still maintains its popularity and high power level.

Firstly, of course, we have to address Galakrond Warrior. In the first post-adventure days, the list didn’t undergo any major changes, with the only change being replacing Eternium Rovers with Risky Skipper. However, recently a lot of strong players have been playing a more defensive Galakrond Warrior with success. The idea is to cut charge minions like Kor kroon Elite and Leeroy to include not only Eternium Rovers but Armorsmiths as well. These cards work amazingly with Risky Skipper and make drawing with Battle Rage more consistent.

Leaving the Galakrond archetype aside, Highlander Warrior has also been seeing some success, especially in tournaments. Highlander Warrior can be combined with decks like Resurrect Priest and Mech Paladin to target aggressive lineups that run Galakrond Warrior and any type of Hunter deck.

Hunter is probably the class that gained the best tools from Galakrond’s Awakening.

Quest Hunter got three new great cards that synergize both with quest decks and his playstyle. Rotnest Drake was exactly the card that Dragon decks needed to become top tier, while Frenzied Felwing synergies amazingly with Hunters game plan and his Hero Power. In addition, Boompistol Bully can further help Hunters ‘’bully’’ those pesky Galakrond decks.

It goes without saying that Hunter players are living the dream right now, with Highlander Dragon Hunter and Quest Hunter being two of the strongest decks in the game. Furthermore, Aggro Dragon Hunter and Face Hunter are always dangerous and not to be underestimated.

Druid is a very interesting example of how the meta shifts.

For a while, after Galakrond’s Awakening was released, Embiggen Druid was THE deck to play. Everyone was crazy about the archetype, loving or hating it. Token Druid also had his fair share of enthusiastic players. However, recently the attention of players has begun to shy away from both of those archetypes. Most players, especially in high Legend ranks, have turned their attention to Quest Druid.

This change in preference is not without good reason, refined Quest Druid lists utilize new cards like Rising Wings and Steel Beetle to improve their early and mid game, while still being able to outvalue basically any slow deck.

For some time before the adventure’s release, Mech Paladin had been gaining ground in comparison to Holy Wrath Paladin, mainly due to the latter’s terrible matchups in the meta.

After gaining Shotbot, a perfect card for Mech Paladin’s playstyle, it has become apparent which archetype is the dominant one. Mech Paladin has been elevated to top tier status and is blessed with a lot of favorable matchups in this meta, like Galakrond Warrior and Hunters.

The Priest class didn’t get any extremely useful new cards with Galakrond’s Awakening, therefore, there have been no innovations or new decks making an appearance.

The pool of Priest decks consists of Resurrect Priest, with or without Quest, and good old Combo Priest. There is a rise of Bad Luck Albatross as a tool against Highlander and Control decks, over previously used Hakkar, that seems to work better for Resurrect Priest. Even though Priests have a hard time in ladder, falling easy victims to the numerous Rogues, the class is still very strong in ban formats.

Favorable matchups with Hunters and Galakrond Warriors can justify using Resurrect or Combo Priest in a tournament.

Warlock was the class that got hit the hardest by the meta shift following Galakrond’s Awakening.

The rise of Hunters, control Warlock’s natural predator, really hurt the winrate of Galakrond Warlock. On top of that, there was no new card that could fit the archetype. This has resulted in Galakrond Warlock taking a massive hit in winrate and representation, both in ladder and in tournaments.

There have been some attempts to refine the Galakrond Zoo build, most notably by cutting Kronx and adding Fiendish Servant and Frenzied Felwing, but with questionable results. The class is generally in a terrible spot for the time being.

The Mage class only has one archetype to show off at the moment, Highlander Mage ,however , that might be the only archetype it needs!

Highlander Mage got a bunch of new tools, with the most impressive one being no other than The Amazing Reno. Interestingly enough, the deck has no clear counters, though on the other side, it has no hugely favorable matchups as well. It enjoys a significant winrate among top players, with many claiming it is top tier. I expect it to do even better once the decklist gets even more refined.

Last but not least, we have no other than Shaman. Even though the class has been struggling ever since the second round of nerfs, there is some hope for Shaman enthusiasts.Aside the old school Galakrond Shaman and Overload Shaman, decks that can certainly get wins but feel pretty weak in this meta of overpowered decks, there is a new archetype. The Galakrond Quest Shaman has been popularized by high Legend players and seems to be boasting a solid winrate in the hands of experienced players.

Taking advantage of the new minions that synergize with playing a Quest, the deck can transition smoothly into its late game. There, the potential of huge board swings like doubling up Galakronds Battlecry or the old fashioned Galakrond into Shudder curve can help close of the game. Undoubtedly one of the most interesting and fresh decks of the meta.

Although it might be easy to forget when your opponent plays a fully invoked Galakrond on 6, using a coin, as Rogue, this is in my opinion one of the best and most balanced metas we have had for a while now.

All classes have at least one strong deck and most of them have multiple ones, with different playstyles. I haven’t enjoyed playing Hearthstone this much for a long time and hopefully, any upcoming changes won’t disrupt this delicate balance.