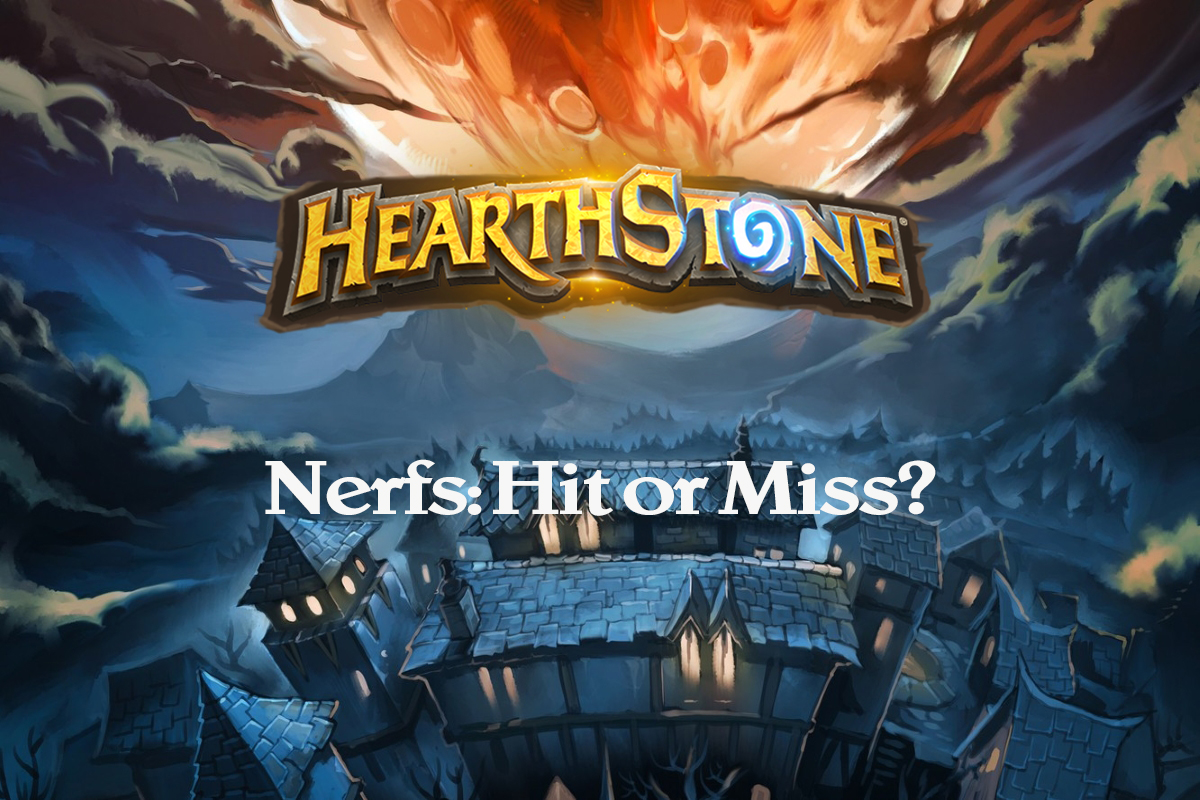 In this article we will be going over the recent nerfs and analyzing if the cards affected deserved this treatment, if the nerfs themselves were reasonable and whether Blizzard had to address some other cards as well (yes, I am looking at you Dr. Boom).

Following the release of the Rise of the Shadows expansion, the Rogue class has seen a huge amount of play that has proven to be meta defining.

Strong tempo plays combined with the ability to push tons of face damage and the nonstop generation of Lackeys and value made Rogue a tough class to counter.

Pretty much every deck had to resort to running at least one source of weapon removal, even if it did not fit their archetype.

It’s no coincidence that the other most popular and successful class during that time was Warrior, a class with natural weapon removal, in the form of Weapon’s Project and Harrison Jones, that has a great matchup against most Rogue decks. It has been obvious for quite sometime that Blizzard needed to make some balance changes to break the stalemate of this Rogue and Warrior meta.

Evil Miscreant has been a staple card on every Rogue deck since it was released. Its strong combo effect, combined with cards like Shadowstep or Waggle Pick generated far too great value far too easy. It was common consensus that it needed to be nerfed.

Blizzard heard our cries and reduced the cards health from 5 to 4. In my opinion, this is quite a subtle nerf.

The card will still see play in every Rogue deck and will still be incredibly strong. Changing the mana cost of the card to 4 would have restricted its use more effectively, as well as limiting the 3 mana choices of Rogues, which at the moment, between Evil Miscreant, Van Cleef and Si:7, seem to be too strong.

Another option would have been to follow the same road of reducing Evil Miscreant’s Health, but this time from 5 to 3 instead of 4. This would have allowed players to deal with the minion easier, thus preventing Rogues from activating its combo effects multiple times.

It is undeniable that the Preparation and Raiding Party synergy had created a very unhealthy situation for Hearthstone.

Getting both in your hand at any point, especially though before turn 4, gave you an insane power turn. Rogues going Preparation into Raiding Party into Coin Vancleef on turn 2 still haunt most Hearthstone players. Therefore it is definitely justifiable that this combo was nerfed.

However, nerfing both cards of the combo seems excessive.

Preparation has been a problematic card for a long time now, creating insane power plays and restricting the design of future Rogue spells, so its nerf had been a long time coming.

Raiding Party, on the other hand, is by no means an overpowered card. Sure it has the potential to draw 3 cards, but there is a condition to be met first and the cards you draw are from a very limited pool. Drawing random cards is strictly better than drawing from a pool of Pirates and Weapons for a number of reasons. Firstly, you are committed to running cards from said pool.

In addition to that, if you draw your Pirates and/or Weapons then Raiding Party becomes a liability in your hand. Furthermore, your opponent has a pretty accurate guess on the cards you might have drawn using Raiding Party, making your next turns predictable.

Aside this, it would have been wise to avoid nerfing Raiding Party, because then Tempo Rogue, as we knew it, could still be played.

With a 3 health Evil Miscreant and a nerfed Preparation the archetype would already be a shadow of its former self, but at least it would not have been nerfed to the ground.

Now, it seems unlikely for an archetype utilizing Raiding Party to see play in the near future.

The only non-Rogue card that was nerfed, Elysiana’s case is a weird one.

Aside from being a very powerful late game card, it is best known for creating a rather dire tournament situation. The card, along with bouncing effects, enabled control matchups, especially Warrior Mirrors, to drag out so long that the draw timer would come into play in most series, an unprecedented situation in Hearthstone. That caused tournaments that would normally finish within 10-12 hours to run over 16 hours in a daily basis.It is obvious that this situation had to be dealt with, so this nerf was one of the most requested.

Elysiana at 9 ideally prevents players from using cards like Youthful Brewmaster or Baleful Banker to get the effect multiple times. However, making Elysiana a 9 mana cost card creates another odd situation.

In control mirrors, players can choose to run a single bouncer and make use of the coin to get Elysiana’s battlecry a second time, provided of course that they go second in that specific game.

This could lead to a meta where having the coin equals an almost guaranteed victory.

This scenario could have easily been avoided by making Elysiana a 10 mana cost card.

Cards that should have been nerfed

I think we can all agree that the most refreshing part of the recent card rotation was being free of the Deathknight cards.

Sure, they were really interesting in the beginning, however, a single card generating unlimited value gets repetitive and tiring really fast.

Unfortunately, even after the Deathknight cards rotated Warrior still had access to a powerful Hero card, Dr. Boom, Mad Genius.

Even though there are other Hero cards, like Hagatha the Witch and Zul’jin, their power level comes nowhere near Dr. Boom. A nerf on Warriors Hero card would be very logical to balance the scales.

The most popular suggestion has been to remove Dr. Boom’s effect, giving mechs rush for the game. I think most players would also be happy if the card was changed to cost 9 or 10 mana. That would at least stop Warriors from using hero power the same turn they equip Dr. Boom, or, in the case of the 10 mana cost change, to even shield slam.

Don’t get me wrong, I love Mage as much as the next guy, especially considering that playing the Miracle Mage archetype helped me get my spot to Seoul’s Master Qualifier.

However Conjurer’s Calling is an insanely strong card that could have easily be nerfed down a bit. Combining the card with Mountain or Sea Giants immediately creates a board that most classes can never dream to clear.

Striping the card of its twinspell effect, or increasing its cost to 4 would have both been reasonable. In the first case, Mages would still be able to produce explosive turns, but would not always be able to follow them up with more pressure.In the second, it would be harder for the class to set up big swings, but the overall value of the card would remain unchanged.

Blizzard did a decent job of identifying the problems of the meta and taking action to fix them.

However, nerfing both Preparation and Raiding Party seems excessive, while Elysiana and Evil

Miscreant probably should have been nerfed a bit harder.

Finally, nerfing Dr. Boom and Conjurer’s Calling would have further helped to create a healthy ladder and tournament environment.