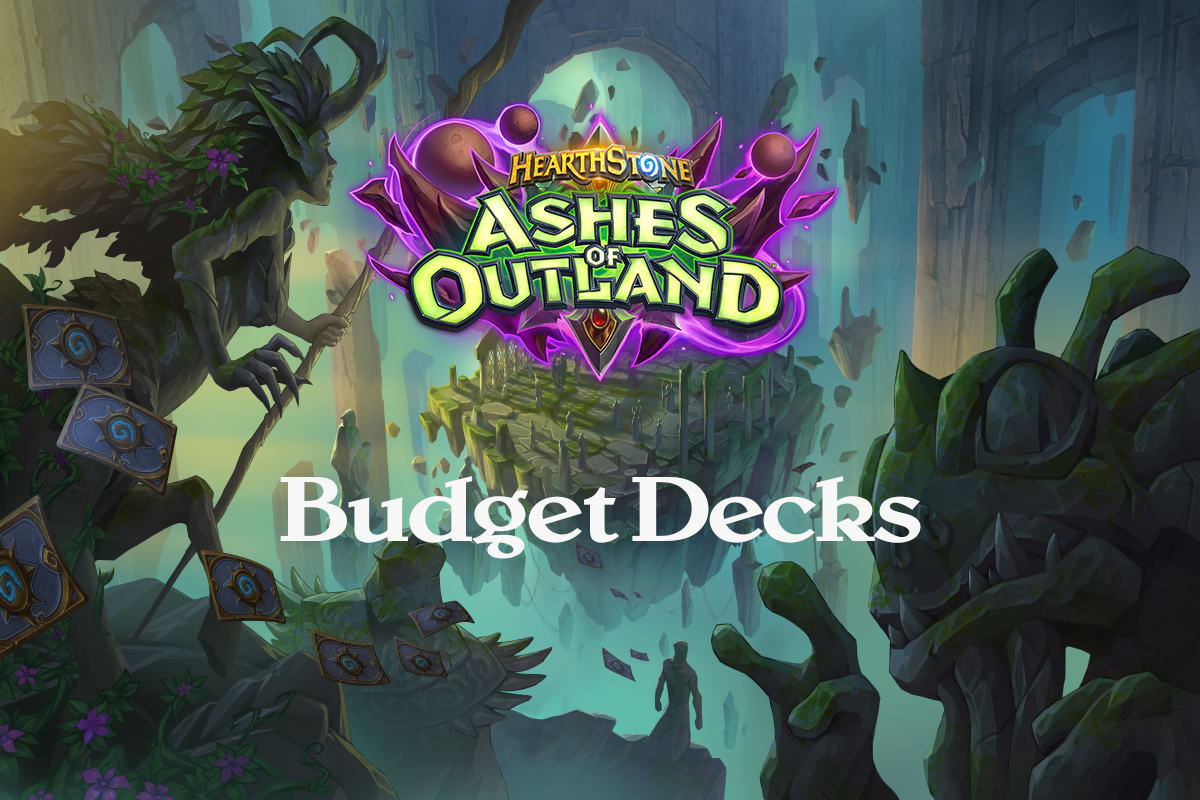 Ashes of Outland has been out for a few days and while there have been a lot of interesting new decks, the meta is still far from being figured out. Like any other expansion, budget players will be in a constant struggle of wanting to play the new decks and having fun, while keeping in mind they need to save dust to create the top tier decks once the meta stabilizes.

For this reason, in this article, in collaboration with my teammate Pain, we will present some budget decks that perform extremely well and should last you until you feel safe to start crafting some legendaries.

Budget Players will be delighted to know that one of the best decks at the moment is actually one of the cheapest ones as well! Spell Druid has been doing incredibly well both in ladder and in tournaments and, since Kael’Thas was a free Legendary, you only need some rares and 2 epic cards to play it!
Navigating the deck you should mulligan aggressively for Fungal Fortunes, Overgrowth and Glowfly Swarm. The only other consideration would be keeping Crystal Power or Wrath against hyper aggressive decks like Demon Hunter. Always keep in mind your opponent’s aoe options and try to play around if possible, either by buffing your tokens out of range at the turn you spawn them or by using Soul of the Forest.

One of the most popular archetypes of budget decks has always been the Zoo variation of Warlock.

Interestingly, the deck has gotten a lot of tools with the recent expansion and can set up some impressive turns. I honestly feel like people have been sleeping on the power level of Zoo, mainly because they focus on the Galakrond option of the class that hard counters Demon Hunters. However, Zoo appears to be a very strong deck with good matchups on its own, like the abovementioned Spell Druid!

Getting the hang of this Zoo version can be a little tricky because you need to heavily adjust your mulligans and playstyle to your opponent’s deck. Aside the obvious mulligan keeps, Imprisoned Scrap Imp and the Expired Merchant plus Hand of Gul’dan combo, you will need to decide whether you want an aggressive opening hand, pressuring your opponent from turn 1, or you need to go for Imp’s buff in a large hand to win a specific matchup.

For an example, against Spell Druid, the optimal start would be Flame Imps into nonstop aggression while against Resurrect Priest searching for Imprisoned Scrap Imp and getting maximum value would be the way to go.

The non-Galakrond, Aggro Warrior archetype had started getting some traction and seeing play prior to the expansions release. Empowering the already existing build with powerful new cards that play around the ‘damaged minions’ condition, results in a solid deck that can go toe to toe with any opponent. For this one it is only needed to invest in crafting Bloodsworn Mercenary, a powerful and versatile card that is used in the majority of Warrior decks at the moment.

Playing the deck is quite straight forward, though some of the combos might need some getting used to. You generally mulligan for Imprisoned Gan’arg and your 2 drops, while keeping in mind potential combinations of cards, like Temple Berserker with Inner Rage and Bloodsworn Mercenary or Risky Skipper and Bomb Wrangler. Ideally, you want to seize the board and pressure your opponent so you can reach victory during the midgame.

Another preexisting archetype. Dragon Hunter, or at least this budget version, can only capitalize on one new card, Pack Tactics, but that should be more than enough to keep an already strong deck alive and kicking. The Deck has always been very effective against slow decks, like Spell Druid and Combo Demon Hunter, while the addition of Explosive Trap can help it hold its own against the aggro decks of this meta, like Aggro Demon Hunter and Zoo.

This archetype is very simple to play. Hard Mulligan for your early curve and keep hitting your opponent in the face until they run out of health, using Stormhammer, secrets and Corrosive Breath along the way to take care of annoying threats.

Demon Hunter is the recently released new class. Despite the nerfs, the class feels extremely powerful with Aggro, Midrange and Combo Demon Hunter dominating the meta. The deck suggested here isn’t exactly the cheapest of decks, since it does run 2 legendaries. However, figuring that everybody will want to try out the class, I did my best to present a list that is as budget as it can be, while still maintaining its power level.

It should go without saying that mastering a completely new class should take some time. The outcast mechanic in particular can sometimes be tricky to set up, especially combined with Altruis the Outcast. Aside that, this version is an extremely aggressive one. Search for early drops in the mulligan and start chipping away your opponent’s health from the first few rounds. The powerful outcast draw engine of the class is so good that you will rarely run out of gas.

The following decks will be a solid suggestion for players that still have not unlocked the cards from the Galakrond’s Awakening adventure. They cost a bit more than our previous suggestions in terms of dust, but this is necessary to maintain a high power level, without using adventure cards.

A particularly fast new combo deck on the block using Kael’thas and cheap spells combined with inner demons to deal lots of damage to the opponent. Even though the deck is quite hard to pilot, it takes advantage of the new outcast mechanics to cycle extremely fast while keeping the board under control at the same time. As for mulligan you keep cheap cycle cards and good outcast cards if they are at the left of your hand.

A more linear midrange deck that some people may be familiar with as it combines the 2 previous shaman archetypes from the last metas (Evolve + Galakrond). It has a standard midrange deck gameplan that fights for the board while invoking Galakrond, but has some incredible ”power turns” with the newly introduced card Boggspine Knuckes.

Developing the weapon at the right time wins games, as the deck has plenty of good evolve targets such as Desert Hare, Dread Corsair and Mogu Fleshshaper. I tend to keep early drops alongside with the new weapon to establish a board presence as fast as i can.

A new style of face hunter emerged with the new expansion and the new deathrattle cards that hunter got are to blame. Teron Gorefiend is an extremely good card that synergizes a lot with the Toxic Reinforcements side quest and with the other deathrattle cards.

The real annoying thing about this deck though is that your opponent feels forced to trade the deathrattle minions because you threaten to copy the deathrattle with Mok’Nathal Lion and if you have a secret up, the situation gets even better because Pack Tactics is a powerful card in your arsenal. Scavenger’s Ingenuity is another good addition, a card that you almost always keep in mulligan along with Dwarven Sharpshooter and Toxic Reinforcements.

There are various strong budget decks to choose from for players that wish to wait for the meta to settle and get maximum value from their dust. Furthermore, even if you haven’t yet acquired the Galakrond’s Awakening cards, there are solid decks you can build, but you will have to invest a little more dust into them.

The most important thing is that anyone can enjoy the expansion and the new Demon Hunter class, no matter their collection!