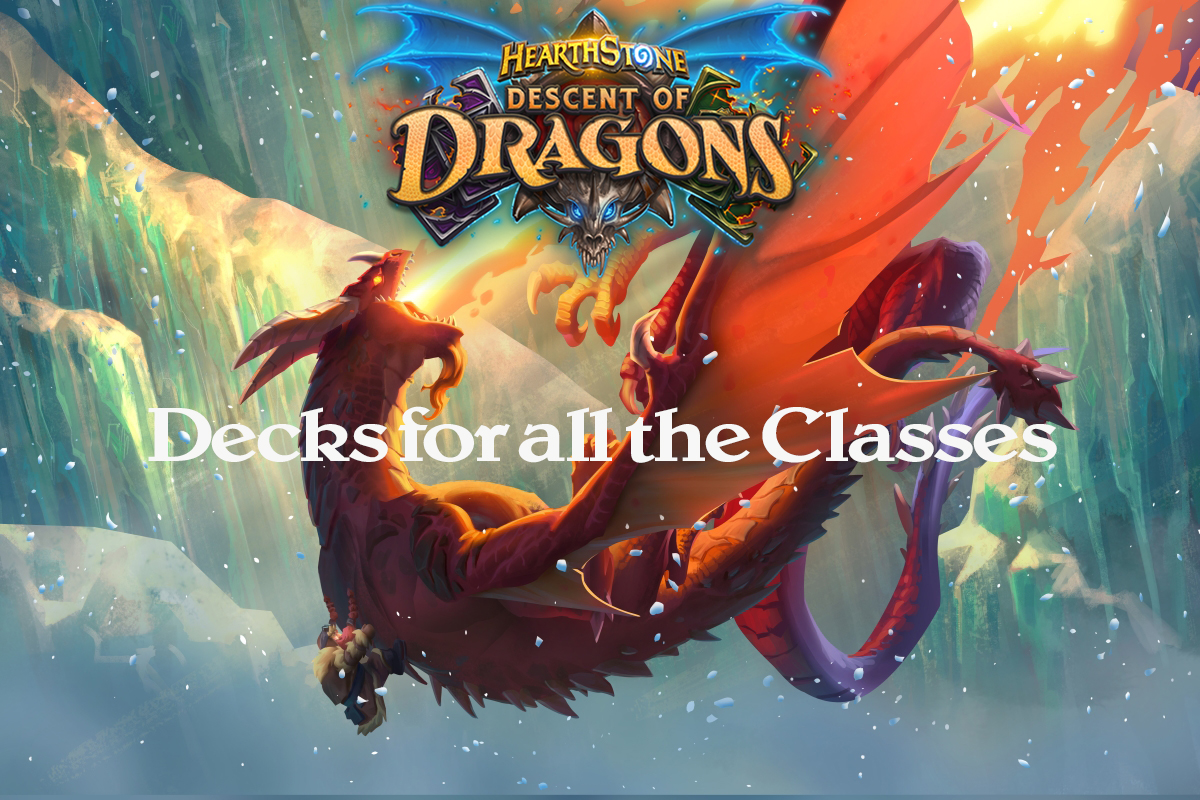 Hello, I am Cursed, a competitive player representing Team Phantasma. In this article we will analyze the tools each class will get with the upcoming expansion ‘Descent of the Dragons’ and suggest possible new decks and archetypes that might see play.

It is hard to theory craft a new archetype for the Hunter class for the upcoming expansion, however some of the new cards are really powerful on their own and will most likely be perfect for the already existing archetype of Highlander Hunter!

Dwarven Sharpshooter and Corrosive Breath will present Highlander Hunter with more options in terms of cheap removal, especially in the early turns. Phase Stalker and Dragonbane are both minions with premium stats for their mana cost, that can be played alongside a Hero Power to activate their powerful effects, or can just be dropped on curve and demand an immediate answer. Veranus provides a very strong body combined with an effect that can easily full clear the board and the curve peaks nicely with Dragonqueen Alexstasza.

The Druid class is getting support for two very different archetypes. Both the Treant as well as the Dragon theme are being pushed pretty hard by the Hearthstone developer’s team. The Treant archetype got an amazing draw engine, in the form of Aeroponics, that can easily be cast for free. It also gains early Treant generators and a, somewhat questionable, late game buff.

On the other hand, Dragon Druid is treated to one of the most iconic effects of the class. The OG Wild Growth ramp is back, only stronger, in the form of Breath of Dreams. On top of that, the archetype gains an insane cost reduction to Dragons, from Frizz Kindleroost, and powerful new Dragons like Ysera, Unleashed, to close off the game. Even though Dragons seem to be more promising at first glance, it will take playtesting to decide which one is the best archetype of the two and if it can rival the all-mighty Quest Druid.

# To use this deck, copy it to your clipboard and create a new deck in Hearthstone

Almost every Mage card in the new expansion seems formidable. From strong removal to Giants and from early drops to upgraded Mage Spell generators, the class is getting tools that could fit a variety of decks. It is quite possible that a miracle Mage deck revolving around Mana Giants could be really strong. The Dragon cards are also powerful, but they will more likely be used in Highlander Mage lists instead of a pure Dragon archetype.

Paladin gets some of the most interesting cards in the expansion. The no Neutral Cards deck theme is introduced for the very first time and even though it is hard to see how it could work with consistency at the moment, players are bound to experiment a lot with the idea! On the other hand, the Dragon cards and synergies appear to be really strong and can be easily combined to form a powerful deck.

Using the strong removal options of paladin, strong late game and the potential to ramp up with Nozdormu the Timeless, Dragon Paladin will be a force to be reckoned with.

Similar to most classes, Priest is also being pushed towards two different archetypes, Dragons and Galakrond. However, in the case of Priest, it feels like a good idea to combine the best of both worlds and create a Dragon Galakrond Control Priest deck. This way, Priest has access to the powerful Dragon aoe clears as well as the strong late game of Galakrond. Princess Talanji can also be used as a late game bomb that summons all the minions that Galakrond and his invocations generated throughout the game.

Remaining true to her identity Rogue gets a Galakrond that draws cards and generates lackeys, making him one of the strongest Galakronds coming out with the new expansion.

Moreover, Waxadred, one of the new Rogue legendaries has a very strong ability that continuously resurrects him, as soon as we draw the candle shuffled inside our deck. Therefore, it is possible that we will see 2 Rogue archetypes played, at least in the first days. One archetype will focus on Galakrond and taking advantage of his and his acolytes effects and one will focus on Waxadred, trying to create multiple copies of him that will all be resurrected every time a candle is drawn.

Shaman’s, older than time itself, archetype of abusing overload is receiving a lot of significant buffs in this expansion. Surging Tempest might not be Tunnel Trogg, but will quite nicely fill the sticky-1drop spot. Storm’s Wrath works incredibly well with already existing Overload cards, like Voltaic Burst and Thunderhead, while Squallhunter and Cumulo-Maximus are powerhouses fitting the archetype perfectly. Aside the buff to the Overload archetype, Shaman is receiving a really powerful Galakrond!

I know that a lot of people are excited about Galakrond Warrior, but personally I find the card to be extremely weak and doubt such a deck will see play, aside from some testing during the first days of the expansion. Moreover, even though Control Warrior would surely put Deathwing, Mad Aspect into good use, Platebreaker shouldbe enough to keep the archetype in check, at least for now.

Therefore, all we are left with is an attempt to create a Pirate Warrior. Pirates are getting a lot of support, most notably a Mech reprint of ship’s cannon and Ancharrr, one of the best weapons ever designed.

Last but not least, Warlock! It is hard to predict which archetypes will prevail for Warlock. Perhaps there will be multiple high tier ones. Warlocks are getting support for Dragons and Handlock builds, as well as a formidable Galakrond that can be utilized in both control and aggressive decks.

In particular, for Dragon Warlocks Nether Breath should be one of the strongest early removals in the game and Crazed Netherwing is great in terms of value and tempo, since it basically costs only 1 mana more than Hellfire, but also provides a 5/5 body. Regarding aggressive, zoo type decks, Galakrond is very similar to Guldan, he provides a powerful late game push to help bring the game home. The invoke cards also synergize well with board centered decks and cards like Knife Juggler and Dire Wolf Alpha, because of the imps every invocation generates.

With the expansion coming out soon, what decks are you most excited about? Do you have any interesting ideas that we might have missed? Let us know in the comments!